This page in progress intends to present Euler’s theory of the Tonnetz and its developments in Europe until the early 20th century, particularly until Hugo Riemann. One will find hereby a bibliography of Euler’s writings on music.

The first presentation of the Tonnetz is on p. 147 of Euler’s Tentamen novae theoriae musicae (1739), where he explains how to tune an instrument by ear. For the word “tuning”, Euler uses the Latin temperatio, but there is no temperament involved: the tuning clearly is “just intonation”, i.e. a tuning of pure fifths and pure major thirds.

The complete processus of this tuning is more clearly perceived from the following figure:

“As the sounds E, H [i.e. B], G#, F#, D# and B [i.e. A#] are determined by two methods, both as fifths and as thirds, one will obtain a non negligible help in tuning the instrument, where any error made will easily be perceived and corrected.”
As can be seen in the figure above, fifth relations are denoted by the Roman numeral V, major third relations by the Roman numeral III.

In his De harmoniae veris principiis (1774), § 13 (pp. 339-340), Euler explains how to build what he calls the genus diatonico-chromaticum (i.e. just intonation) by transposing the series of major fifths F–C–G–D twice a major third higher, to A–E–H–F# and to C#–G#–D#–B [i.e. A#], and illustrates this by the following diagram: 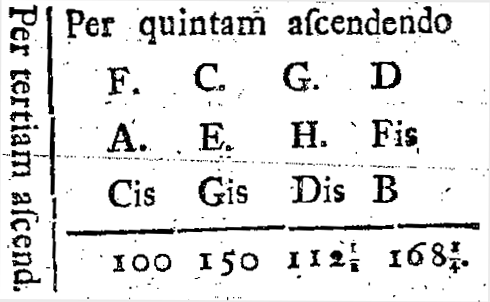 Later, he explains how paths producing unusual intervals, e.g. the limma minus, F–F#, produced by three fifths and a major third (F–C–G–D–F#), can easily be found on the diagram below (p. 350), stressing that several paths are possible for the same interval. He sresses for instance that there are ten possible paths from F at the upper left corner to B [A#] at the bottom right corner. 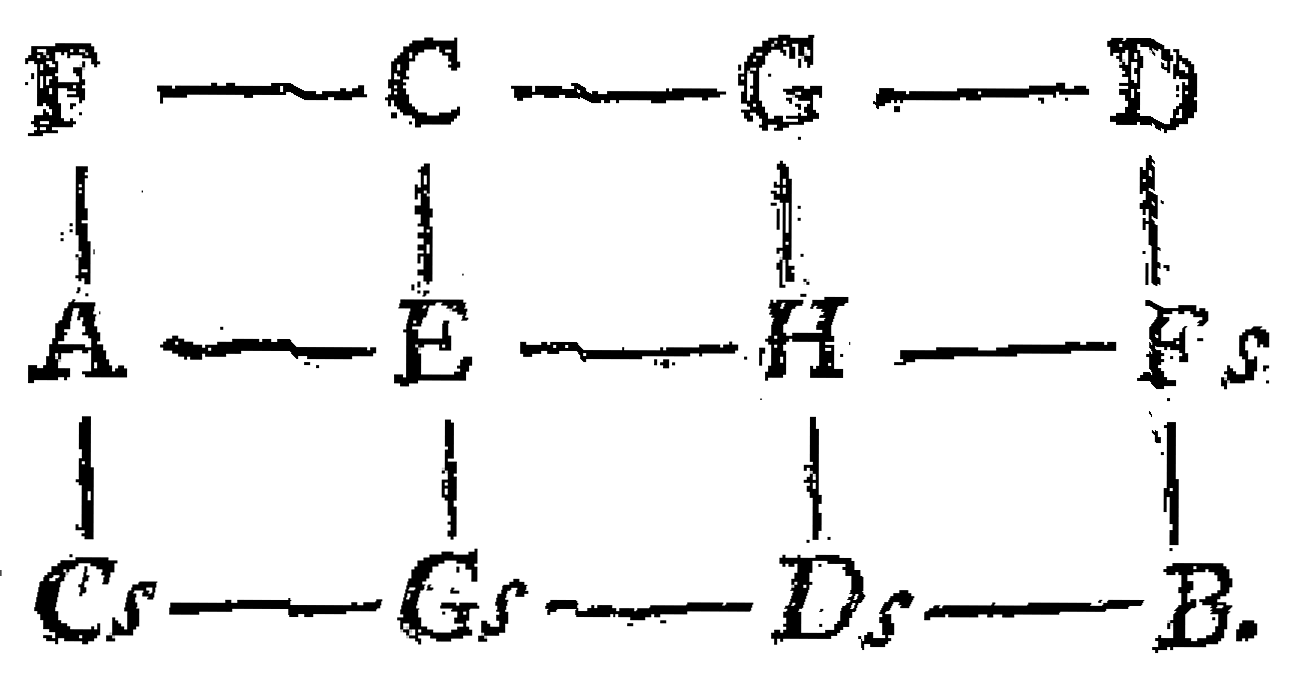 All these diagrams illustrate just intonation, the scale usually described by 18th-century theorists.

Euler’s Tonnetz nevertheless knew an extraordinary fortune and has been used until recently to describe a variety of musical phenomena.